Inmarsat has entered into an agreement with Mitsubishi Heavy Industries Ltd. (MHI) to be the first commercial customer to place an order for the new H3 launch vehicle. The maiden flight of H3 is scheduled for 2020 with Inmarsat planning to deploy the new launch vehicle after 2022.

This is the second agreement entered by Inmarsat and MHI, following the launch services contract awarded to MHI’s H-IIA launch vehicle in 2017. These agreements underline the growing partnership between the two companies in the area of launch services. 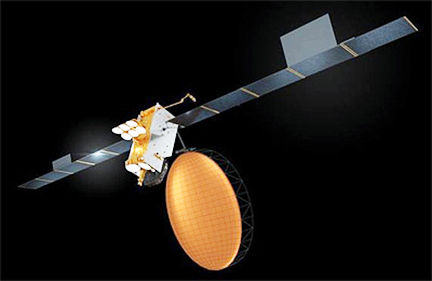 Artistic rendition of the Inmarsat-6 F1 satellite. Image is courtesy of Airbus Defense and Space.

Rupert Pearce, CEO of Inmarsat, said that Inmarsat continually seeks new technology partners that display an outstanding commitment to innovation and excellence, which resulted in the selection of MHI as a launch partner and why the company is delighted to be announcing that Inmarsat is the first commercial customer to select MHI’s new H3 launch vehicle. H3 represents a world-class innovation and one that will deliver an effective and efficient service to place future Inmarsat satellites into orbit.

Artistic rendition of MHI's H3 launch vehicle. Image is courtesy of the company.

Masahiro Atsumi, Vice President & Senior General Manager for Space Systems at MHI, added that today, the development of the H3 launch vehicle is proceeding steadily forward under the leadership of the Japan Aerospace Exploration Agency (JAXA), with MHI serving as primary contractor working closely with key component manufacturers. MHI greatly appreciate the high evaluation made by Inmarsat during this development phase and, working closely with JAXA and government agencies, MHI will do everything possible to ensure that development results in a new flagship launch vehicle fully meeting the customer’s high expectations.

Commenting on the announcement, the Rt. Hon. Greg Clark MP, UK Secretary of State for Business, said that long-term strategic partnerships such as the one between Inmarsat in the UK and MHI in Japan demonstrated that science and innovation have no borders. He noted that the space sector is a UK success story and an industry that is growing globally. A year since the launch of the UK's modern industrial strategy, the nation's commitment to space is revealed through the announcement of the UK’s first spaceports and record investment in a world leading science base.

MHI Launch Services enjoys an extremely high success rate of 97.9% and has provided 41 successful consecutive launches since 2005, delivered on time and to the customer’s satisfaction by both H-IIA and H-IIB launch vehicles.

The agreement with Inmarsat reflects MHI’s long-term commitment to supporting a wide range of customers in the space industry. MHI will continue to support the development of the space industry, and will seek further new opportunities in this field both in Japan and globally.